Trump Says He Will Label Regions by Risk of Coronavirus Threat 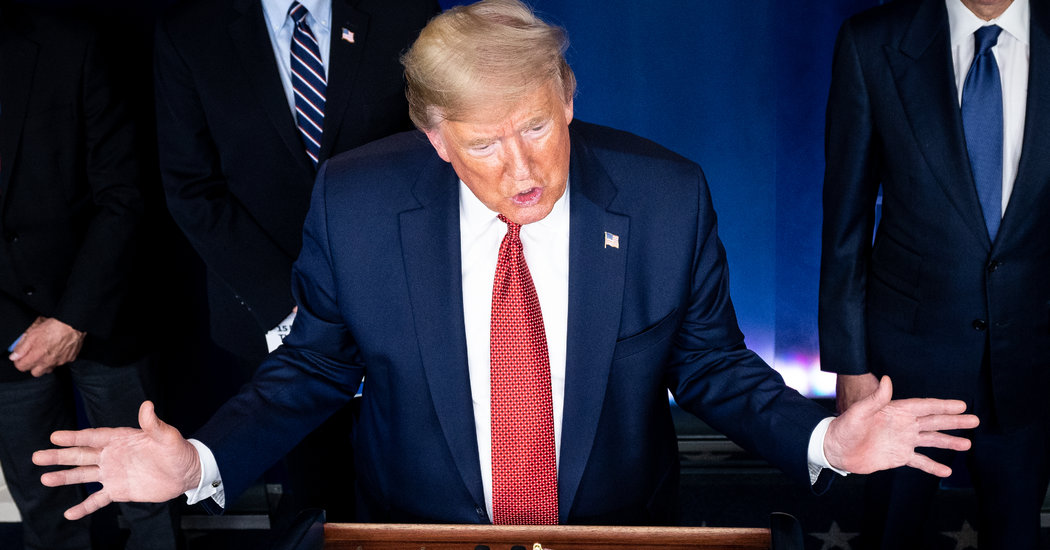 WASHINGTON — President Trump said Thursday that he planned to label different areas of the country as at a “high risk, medium risk or low risk” to the spread of the coronavirus, as part of new federal guidelines to help states decide whether to relax or enhance their quarantine and social distancing measures.

“Our expanded testing capabilities will quickly enable us to publish criteria, developed in close coordination with the nation’s public health officials and scientists, to help classify counties with respect to continued risks posed by the virus,” Mr. Trump said in a letter to the nation’s governors.

The president also participated in a video teleconference with governors to discuss the response to the virus, rebuffing a plea from Gov. Jay Inslee of Washington for a more forceful response to the outbreak, according to two officials familiar with the conversation.

Mr. Trump sent his letter to the governors as the death toll from the virus in the United States passed 1,000, and in hot spots like New York, 100 people had died because of the virus in one day. Gov. Andrew M. Cuomo of New York said on Thursday that the worst days and weeks of the crisis were still ahead.

But Mr. Trump said the goal was to look toward the day when Americans could “resume their normal economic, social and religious lives.”

Earlier in the week, he said he wanted to reopen the country for business by Easter, on April 12, despite widespread warnings from health officials that the worst effects of the virus were still weeks away and prematurely lifting social distancing guidelines would result in unnecessary deaths.

At the time, Dr. Anthony S. Fauci, a leading health expert on the administration’s coronavirus task force, said the additional testing now available gave the administration some “flexibility in different areas” to do so.

“People might get the misinterpretation you’re just going to lift everything up,” Dr. Fauci said, explaining Mr. Trump’s impatience to jump-start the economy and tell Americans they could resume everyday life. “That’s not going to happen,” Dr. Fauci said. “It’s going to be looking at the data” in regions of the country where there was not an obvious outbreak of the virus.

As a practical matter, however, Mr. Trump does not have the power to decide whether the country can reopen. He can issue federal guidelines, but the decision of whether to return to business as usual is up to each state.

“States are understood to have a general power to legislate for the health, welfare, safety and morals for the people of their state,” said Andrew Kent, who teaches constitutional law at Fordham University’s School of Law.

The administration released its first set of federal guidelines to slow the spread of the coronavirus on March 16. The 15-day plan included closing schools and telling people to avoid groups of more than 10 as well as bars, restaurants, food courts and discretionary travel.

Mr. Trump has been eager to send a message to the business community and to the markets that there is an end date to the economic standstill caused by the coronavirus and the response to it.

But public health experts warned that there needed to be a nationwide approach to fighting the spread of a virus that could easily move around the country just as it has done around the globe. And many expressed horror at the idea of pulling back on mitigation efforts too early.

Since his declaration of an Easter timeline, his aides have made clear that it was meant less as an edict and more as an ambition. Kellyanne Conway, the counselor to the president, said Thursday that the administration would “follow the facts of the data” in the new guidelines it issued.

Stephanie Grisham, the White House press secretary, said in an interview with “Fox & Friends” that the president “wants to have a message of hope to the American people.”