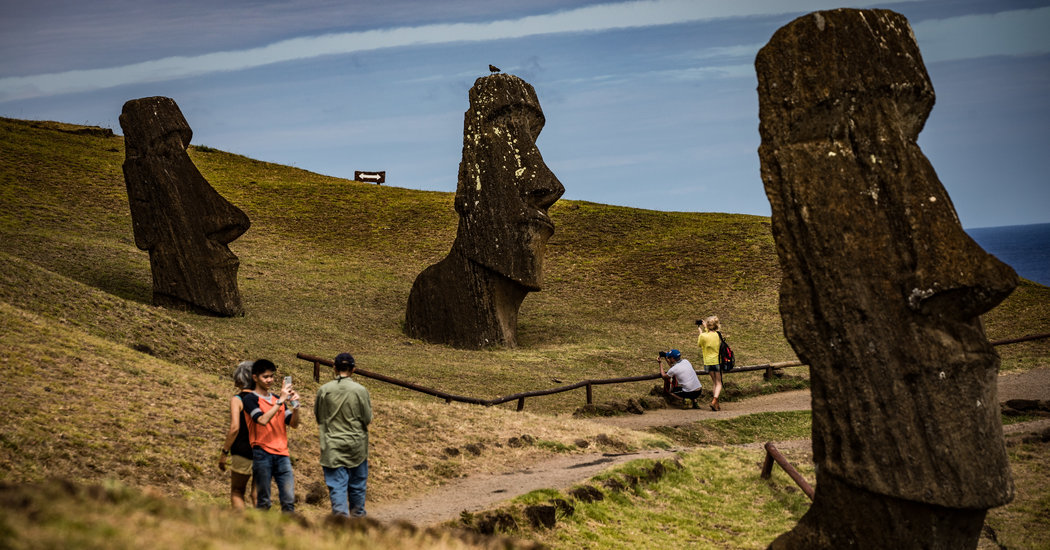 The statues on Easter Island have stood for centuries, facing inland to watch over a community that reveres them as memorials of their ancestors. Made of volcanic rock, they have braved many challenges over the years: climate change, lichen growth, damage from livestock and the encroaching development of tourism.

The unoccupied truck, which had been parked, rolled on Sunday onto an ahu, a ceremonial mortuary structure that supports about half of the nearly 1,000 statues, or their toppled remains, local officials and archaeologists said.

Ma’u Henua, the island’s cultural heritage organization, posted photographs of the crash on its Facebook page, showing the vehicle perched on top of an intact statue that had been on its side near the ahu where it had once stood.

“We reiterate the importance of taking care of the heritage we have in our park,” the organization said, calling the crash “seriously damaging.”

Referring to the statues, the group said: “They are not only archaeological vestiges. They are sacred elements for a living and fundamental culture.”

The Easter Island statues are sacred to the people of the island, which they call Rapa Nui.

Some of the statues are full figures, buried neck-deep in trenches, hillsides or quarries. Others were erected on ahu structures, and toppled during a period of civil struggle that started in the 1700s, or have been knocked over by natural disasters, such as earthquakes, archaeologists said.

Jo Anne Van Tilburg, an archaeologist and the director of the Easter Island Statue Project, said there were about 350 ahu structures throughout the island, each having one to 15 statues on it. Only 50 statues have been re-erected on various ahu, and the rest have remained toppled.

The one at Ahu O’hae crushed by the truck was about seven feet long, making it one of the smallest. As with many of the other ahu structures, it is not known exactly why the statue first fell from its site.

“This is a mortuary. That is what ahu are,” Dr. Van Tilburg said. “This man basically ran right smack into a grave. It could not be worse.”

The crash on the island’s coast, where the indigenous people control the sites but the Chilean government controls access to them, has renewed concerns about how to protect the UNESCO World Heritage site.

“The island is an open-air museum where there are more than 25,000 archaeological remains,” Camilo Rapu Riroroko, president of the Indigenous Community of Rapa Nui Mauhenua, said on Friday. “We can’t close off the whole island,” he said, and suggested that penalties be increased to avoid a repetition of such a crash.

“We are a living culture that maintains its traditions, and the place where this happened is not a tourist site, it is a place of traditional use for the Rapa Nui people,” he said.

He said the driver was arrested and could be held for up to 90 days while the authorities investigate. It was not immediately clear what charges he faced.

The ahu hit by the truck is sometimes known as Ahu Pu a Pau, a reference to the name of the cove where it is.

“The damage here is not only material, for us a moai is the representation of our ancestors,” Andrea Tuki, an archaeologist there, said. Moai is the indigenous name for the statues.

The archaeological sites serve as the main industry of the island, which is about 2,200 miles off Chile’s mainland in the Pacific Ocean and has about 8,000 residents and attracts more than 100,000 visitors a year.

Pedro Pablo Edmunds, the mayor of Hanga Roa, the island’s largest settlement, told Chile’s El Mercurio newspaper that the crash revived a debate about curtailing road-building at the sites.

“Everyone refused to regulate the circulation of any vehicle in a sacred place through an ordinance,” he said, adding that eight years ago he had warned of the dangers that could come with an increase in tourism. He could not be reached on Friday.

Gina Pakarati, a tour guide who is a relative of the unidentified driver, said in an interview that the man had parked his truck in the hilly, coastal area to go fishing, wedging rocks under the tires to keep it from moving. When he removed the rocks, the truck slid down the slope, which was slippery from weeks of rain, and rammed into the site.

The truck came to rest on top of pieces of the head, she said.

“This statue is lying down and the car is passing over the head of the moai, which was broken,” she said.

She said the driver reported the damage to park rangers.

“He is very concerned with what happened,” she said. “He is very stressed and very apologetic.”