South by Southwest Is Canceled as Coronavirus Fears Scuttle Festival 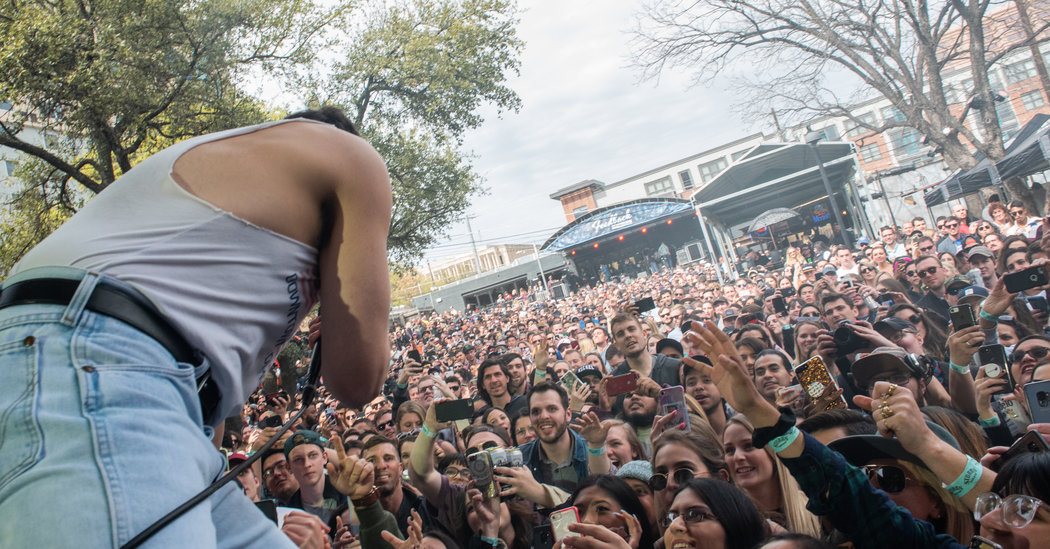 The 34th annual edition of South by Southwest, the sprawling festival of music, technology and film in Austin, Texas, that has become a highlight on the global cultural calendar, was canceled by city officials on Friday over fears about the rapid spread of coronavirus.

Festival organizers and government officials had come under intense pressure in recent days to pull the plug on South by Southwest, with more than 50,000 people signing an online petition and a growing list of tech companies — among them Apple, Facebook, Twitter and TikTok — announcing their withdrawal.

The decision was announced at a news conference by city and county officials who declared a “local disaster,” even as they stressed that Austin has not had an outbreak and that the number of confirmed cases in Texas was relatively small.

Yet they noted that South by Southwest tends to draw many thousands of attendees from all over the world, including from areas affected by coronavirus.

“After careful deliberation, there was no acceptable path forward that would mitigate the risk enough to protect our community,” said Dr. Mark Escott, the city’s interim health authority and public health medical director.

No one representing South by Southwest spoke. In a statement, festival organizers said: “We are devastated to share this news with you. ‘The show must go on’ is in our DNA, and this is the first time in 34 years that the March event will not take place. We are now working through the ramifications of this unprecedented situation.”

“As recently as Wednesday,” the statement continued, “Austin Public Health stated that ‘there’s no evidence that closing SXSW or any other gatherings will make the community safer.’ However, this situation evolved rapidly, and we honor and respect the city of Austin’s decision.”

The festival was to have run from March 13 to 22, with events planned throughout bars and party spaces across Austin, and at a crowded convention center. In their statement, organizers said they were working to reschedule the events, but the complex planning and tour routing that goes into putting on the music festival may make that very difficult.

Globally, more than 100,000 people have been infected by the coronavirus and more than 3,000 have died in an epidemic that began in China but has spread widely, including in South Korea, Italy, Iran and the United States, where at least 250 people have caught the virus and 15 have died.

The cancellation of South by Southwest is perhaps the largest collateral damage of the virus so far on the international cultural calendar.

On Friday, organizers of Emerald City Comic Con in Seattle, which is in the midst of an outbreak, announced they were postponing the event, which was to begin next Thursday; and Miami officials said that this month’s Ultra Music Festival, a long-running dance event with an international audience, had been canceled. Other events are still going on — if perhaps with more hand sanitizer flowing — including this weekend’s Armory Show art fair in New York.

Originally a scrappy showcase for new bands, South by Southwest — or “South By,” as it is widely known — has long since morphed into a vast mix of media, marketing and pop culture, where major brands intermingle with tech start-ups and independent musicians to mutually drum up buzz.

The dozens of scheduled events this year included the premiere of the “Beastie Boys Story” documentary and an appearance by its director, Spike Jonze; the comedy writer and director Judd Apatow interviewing Stephen Colbert; and Kim Kardashian West discussing her criminal justice work. Among the big musical names were the producers Pharrell Williams and Benny Blanco; Kim Gordon, formerly of Sonic Youth; and a keynote speech by Roger Waters of Pink Floyd.

Last year, South by Southwest’s various events had a combined attendance of 417,000, including 159,000 who came to the music portion, according to festival figures.

The cancellation of the festival now raises questions about reimbursements for festival tickets, which can cost upward of $1,700, as well as travel reservations. The festival’s statement did not address whether refunds or exchanges would be offered for tickets.

Several hotels, including the Holiday Inn Express in downtown Austin, the Fairmont Austin and the Driskill, said that they would give refunds to anyone whose reservations were affected by the cancellation. Southwest Airlines said it had a standard policy of letting passengers exchange tickets, and other airlines have instituted more flexible exchange rules since the beginning of the outbreak.

Many performers and presenters had already sunk money into the event. As news of the cancellation spread on Friday, musicians and others planning to attend were left to wonder whether they could recover any lost costs.

Prentice Robertson, the lead singer of the Scottish indie-rock band Vistas, which was going to be making its United States debut at South by Southwest, said in an interview this week, before the event was canceled, that his band was eager to go but also nervously considering the safety risks of travel. It had spent more than 6,000 pounds (about $7,800) on travel and other expenses in anticipation of going to the festival.

Mr. Robertson said on Friday that when the news arrived, he was looking over a payment invoice from the band’s equipment rental in Austin.

The cancellation also raises questions about the many ancillary events, like brand-sponsored parties, that are not part of the official festival calendar but are a vital and inseparable part of the spectacle and attraction of South by Southwest. These take place in bars and restaurants around Austin, as well as in seemingly every open spot available — parking lots, yards, industrial buildings.

Alan Miller, the owner and president of the marketing company Collide, which produces a series of such events each year, said that his company was planning on moving forward unless “told by the rule of law that we are not allowed to be there anymore.”

“South by Southwest is not like any other festival, any other conference,” Mr. Miller said. “This entire festival grew because of people taking chances. We are brave people and we need to represent culture and stand strong in this time.”

The cancellation will also be a blow to local restaurants, bars, clubs and other businesses that hold events tied to the festival and count on traffic from those who attend.

Last year, the various events associated with South by Southwest — which also include programs on gaming, comedy and education — contributed $356 million to the economy of Austin, according to figures circulated by the festival. As South by Southwest has grown, it has helped elevate Austin’s reputation worldwide as not only a music destination but a home for technology and innovation.

Addressing the question of economic effects, Mayor Steve Adler said: “All ramifications are secondary to helping to ensure we are safe as a community. We will deal with and work our way through all the other ramifications.”

For the larger concert industry — a primary source of income for many artists — what happens at South by Southwest may be an indicator of the year to come. Some major acts, like Green Day and Avril Lavigne, have canceled Asian tour dates. But the rest of the business has, at least so far, been little affected, with major tours by Lady Gaga and Enrique Iglesias and Ricky Martin being announced in recent days.

Last week, executives at Live Nation Entertainment, the world’s largest concert promoter, said they were optimistic that the virus would have only limited impact, with Joe Berchtold, the company’s president, telling investors on an earnings call that “we have seen no pullback in fan demand outside of the affected areas.”

The live music industry’s next major event is the Coachella Valley Music and Arts Festival, set to run April 10 to 19. The promoters of the festival — one of the music world’s biggest, which also tends to draw an international audience — have not commented on whether any changes are expected.

The risks of going to South by Southwest had been debated behind the scenes this week by artists and their managers, publicists and record companies. One of the few who had spoken out is Sadie Dupuis, who performs as Sad13, and who said she would not appear because of concerns about the festival abetting the spread of the virus.

As artists, as well as technology and media companies, canceled their events this week, the growing list demonstrated some of the breadth of what is typically presented at South by Southwest. Ozzy Osbourne pulled out. The Starz channel was going to screen a new crime drama series, “Hightown.” Lush, the cosmetics company, was going to put on a marketing event called Unbuild that Wall!, which would have invited participants to “take a stand against racism, fear and hate by deconstructing a giant border wall of soap.”

The city effectively canceled South By Southwest with declarations of disaster from Austin’s mayor and Sarah Eckhardt, the Travis County judge, a position akin to chief executive of the county. Ms. Eckhardt said she signed a declaration disallowing festival gatherings that attract people from areas with documented cases of person-to-person transmission of the virus. Another qualification is that participants of the festival are expected to be in “close and sustained proximity to one another.”

“Clearly, South by Southwest would fall under that criteria,” she said.