How to Make Money in Your Sleep 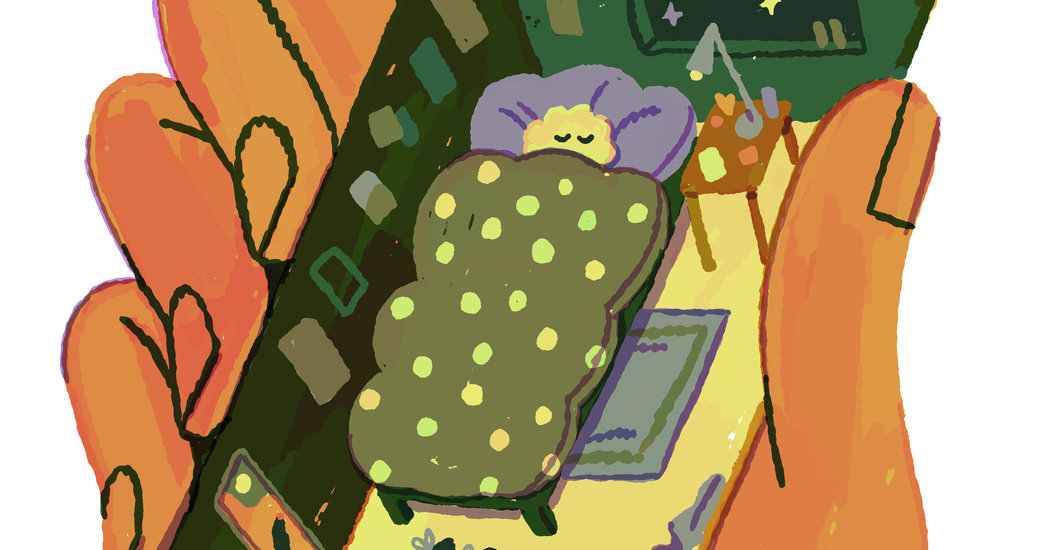 Many fledgling creators dream of waking up to viral fame and riches. Now that dream is beginning to look a lot like reality.

Hundreds of TikTok users have begun live-streaming themselves overnight, while they sleep. Brian Hector, 18, did it just last week. Thousands of people tuned in. Some even donated to him.

“I woke up the next morning and ended the live and went over to my mom and was like, ‘Mom, I literally just made money falling asleep,’” said Mr. Hector, who has more than 347,000 followers on the app.

Through TikTok’s live feature, viewers can donate digital “coins” that can be cashed out for money. On Mr. Hector’s first sleep-stream, he said, he received about $10 worth of coins — not riches, exactly, but more than he’d usually be paid to go to sleep ($0).

What most users hope to gain from these sleep-streams are followers. “Overnight my video blew up, and I got over 6,000 new followers,” said Oscar Reyes, 18. “After I stopped the stream I lost followers, so I don’t know if people were just following for the stream, but I grew substantially. I went from 12,000 to 18,600 followers.”

Jasmine Stephens, 16, said that for days, her “for you” feed on TikTok has been full of videos promoting sleep live-streams. “I scrolled and scrolled and saw more and more,” Ms. Stephens said. “I was like, OK this is a thing now. I saw videos with over one million likes.”

Though it is newly a trend on TikTok, sleeping on camera isn’t exactly a new concept. In 2015, many teenagers began casting their sleep on the platform YouNow, using the hashtag #sleepingsquad.

Twitch, which primarily hosts gaming live-streams, bans on-camera sleeping, since it counts as leaving a feed “unattended.” In January 2019, one Twitch streamer inadvertently passed out and woke up to 200 new followers. The clip, with more than 3.6 million views, has since become the most-watched Twitch video ever.

On Feb. 9, 18.5 million viewers tuned in to watch one man sleep on Douyin, TikTok’s Chinese counterpart.

Before they go live, TikTok sleep-streamers usually create a promotional video that they post to their feeds, advertising the sleep-stream happening that night. When bedtime approaches, they prop up their phones on their night stands, crawl under the covers and hit the live button.

“I’ve seen so many people start doing it,” Mr. Hector said. “The first time I saw it I thought it was honestly the weirdest thing but also the coolest thing.”

For users who watch sleep-streams, the appeal isn’t necessarily the person streaming but the pop-up community that forms in the stream’s chat section. Live-streams on TikTok aren’t archived, so sleep-streams, many of which are simply a dark blank screen, provide a time and place for users to meet.

Todd Neer, 32, has watched a handful of sleep-streams and even done one himself.

“It creates a chance for a live online chat that’s not really available anywhere else in TikTok,” he said. “The sessions aren’t saved, so you just chat with whoever is there. It’s just an opportunity to have a more real-time dialogue than the comments section on someone’s post. It’s a hub for people to have conversations.”

Brian Mandler, a founder of the Network Effect, a digital agency focused on TikTok, said that the streams also provide a level of authenticity that so many users on the platform currently crave. “Audiences really like the behind the scenes of someone’s life,” he said. “They want authentic, engaging content. Watching someone sleeping, while it’s unique and somewhat strange, as you start to understand what really works on social media, it makes sense.”

Between the performance anxiety and all that blue light, not everyone can sleep through a live-stream. Mr. Reyes said he woke up several times during his own; at one point, he saw about 600 people were tuned in and chatting. “When I woke up they’d be like, ‘OMG he’s awake!’” he said.

Because the sleep-streams are in real time and unedited — versus other TikToks — there are also safety concerns. Rylee Breann, 21, was deliberate about what her viewers would be able to see. “I didn’t show much of my room because I have a lot of pictures,” she said. “I didn’t want to show anything that showed where I lived. You could just see my head and my bed.”

Dale Adams, 21, said that he turned his phone over after a couple hours to shut the stream down. “It was kind of nerve racking,” he said, “Like, what if someone could hack into my phone and figure out where I am?”

Some users have found other ways to idly host live-streams.

“People have gone live saying, ‘Oh, my parents don’t want me filming myself sleeping, so I’ll stream this other picture in another room overnight,’” Ms. Breann said.

“I’ve seen people live-stream their rooftop overnight with 10,000 people watching, or people stream a glass of milk while they’re gone at work,” Mr. Reyes said. “All these people come into the live just to chat and make group chats.”

Rather than streaming his sleep, Joe Fay, 24, decided to live-stream his white Tesla “sleeping” in the driveway overnight. He taped his phone to the window and hooked it up to a charger; by the morning he had accrued $50 worth of digital coins. “It’s a pretty easy thing to do,” he said, adding that he plans to continue streaming until the trend dies out.

The streams can have a pleasant, sedative effect. Some sleep-streamers play soft music, or perform a soothing bedtime routine for their viewers. The experience can be relaxing for the host too.

“When I did it, I felt like people were watching over me so nothing could happen to me,” Mr. Reyes said. “I slept like a baby.”